Long time, no post, so what´s new in Funland? Weeeell, as you might have heard we have 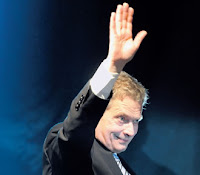 Sauli Niinistö tried his luck already during the last election six years ago and got defeated by Tarja Halonen (obviously). Her victory back then was thin as paper and this time around Niinistö, who belongs to the conservative Kokoomus party, won over Pekka Haavisto (Green Party) with sixty something percent of the votes. Maybe not a huge surprise regarding his popularity during his last attempt. Somehow interesting though that many liked what his opponent Haavisto had to say - but didn´t vote him cause he´s gay.
a new Miss Finland... 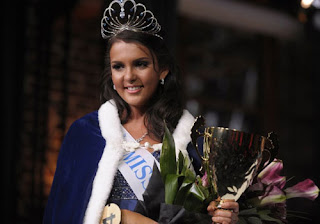 Sara Chafak shed many a tear of joy when being crowned Miss Suomi and doesn´t she look exactly like you imagine a Finnish lady? She´s of Moroccan heritage and reigns now from Helsinki of all places, Vuosaari to be exact. Strange enough as I have friends there but never bumped into her 84-63-91(cm) when buying beer at the local S-Market before drinking with my buddies. Weird...
and I got a new pedal!
I´m playing guitar now for almost 25 years and this is my very first stage tuner pedal. I always thought I don´t need to spend money on a machine that does something my ears still can do pretty well for free. Also somehow regarded those things as definitely NOT punk rock. Never bought into the "he who tunes is a coward" motto either but you know...it was never really needed. Until now.
In my new band I have my guitar always tuned down a whole step which allows it to easily go out of tune. Then a good chunk of the songs are in drop D tuning (so actually drop C tuning, whole step down, remember?) which makes it even worse.
I´m basically tuning all the time, be it for the sake of the song´s key or to avoid sounding shitty.
In order to avoid annoying the fuck out of an audience going bim - bim...bim - bim...bim - bem mmiiiuuiiuuiiiiii... after every little ditty I got the TU-3 now, which cuts off the signal while in use. Although I still look sceptical in the pic, I´m actually quite happy about this latest arrival. Combined with my chorus and delay pedals it doesn´t make me a shoegazer yet but I have to pay a bit more attention now on what I´m stepping there in the dark...There´s a reason why I bought the tuner at this particular point of time. I´ll post about this reason very soon, so stay tuned!
Posted by JottEff at 12:12 PM

It sucks that Haavisto suffered in the election due to his sexual orientation, but man, I swelled with Finnpride when he managed to make it as far as he did. Then I watched US election coverage and wept a little. ;)

Well, I am a bit of a shoegazer (or, I'd be one if I played guitar) and I'm all for stuff being in tune. Damn my indie sensibilities and my classical training! Enjoy the pedal and your note-perfect "drop C" tuning. :)

@Elena
In Helsinki the votes were almost 50-50 which I think is cool. Haavisto did pretty well, goes to show that many people in Finland care more about the actual politics than what a candidate does in his spare time with a consenting adult.

The pedal works great, trial by fire was yesterday. Of course I stepped on the wrong pedal at least three times - guess I have to practice my shoegazing a little more...

I like your transcription of the manual tuning process. Very authentic indeed ;-).
El Morriso

Kudos, I tried my best to describe the process for the non-guitar playing readers. My advice for those who still didn´t get it is to listen to one of the greatest live albums of all time, "Evilive" by the Misfits. Between "Nike a Go Go" and "Hatebreeders" Axeman Doyle perfectly demonstrates the problem.